A census of the world population is taken every ten years

A census is taken in the various countries of the world roughly every ten years. In China, six million enumerators were needed in 2010 to go around every household to collect information on forms. In Finland, on the other hand, the population census at the turn of last year was hardly noticeable. Since 1990, Statistics Finland has been carrying out censuses directly based on administrative registers without troubling the citizens, but in most parts of the world, censuses still rely on the conventional method of interviews.

Following a UN recommendation, an effort is made to conduct population censuses always in years ending with a ten, while in practice the time of the census may vary in different countries. The first data for the census of 2010, for example, had already been collected in 2005 in some countries, whereas in others they will not be collected until 2014.

In April 2011, an estimated 79 per cent of the world population had been enumerated, and a census had been carried out in 134 countries. Only six states in the entire world have no plans to carry out a census in the near future.

Regular censuses can only be taken in wealthy industrialised countries. A lack of resources alone prevents developing countries from carrying out frequent censuses. However, a census has been taken in all countries of the world at least once since the 1950s.

A census describes the entire population

The primary purpose of a census is to describe the population living in the country at a certain moment in time: the number of population, population structure and its geographical distribution. In addition, censuses collect information on the living conditions of the population, educational structure, families and households, number of children, migration, economic activity, occupations and branches of industry. Information about buildings and dwellings is often also collected in connection with censuses.

Many countries also produce this type of information not only in connection with the actual censuses but also at other times. In Finland, population statistics are compiled annually based on the Population Register, and taking an actual census is thus unnecessary purely to establish the number of population. Various types of sample-based statistics can also be used to produce information about the economic activity of the population at national level. The Labour Force Survey, for example, is a sample survey repeated on a monthly basis, which produces readily available information about employment and unemployment.

Majority of censuses conducted by interviews

In most countries of the world, censuses are still carried out following the customary method of collecting data directly from the population, either by interviews or by a form that is mailed to households. For example in China, India, Russia and many other countries with a large population, a conventional census is conducted, where enumerators go round from door to door, recording data on a form.

Conventional interviews are used especially in developing countries where the poor literacy skills of the population make it impossible to collect information by mail. In addition, an incomplete address register and poor infrastructure may prevent countries from using a mail survey.

Taking a census in Kosovo, spring 2011 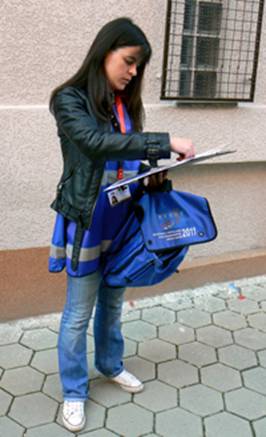 In a mail survey, a census form is sent to each household. An individual form is filled in for each member of the household, and the forms are mailed back to the statistics authorities. In addition to literacy, the population must have an educational standard ensuring that the questions and concepts can be understood. Until the census of 1960, interviewers only were used in the United States. The reasons for this included the fact that the English proficiency of immigrants living in the country was not expected to be good enough to fill in the census form without assistance.

Interviewers are often used in addition to a mail survey. In the 2010 census in the United States, enumerators collected the information from those who failed to return the form by mail. Some countries have also introduced an online form in addition to the customary printed one. Using the online form cuts down on the costs of data collection and improves data quality.

The first direct census in Finland in 1950 was also carried out by interviews. In the censuses of 1960 and 1970, municipal census committees were used. After this, censuses by mailed questionnaires were introduced. From 1970, register data were used in addition to information collected directly until the year 1990, when the census was finally carried out exclusively based on registers.

Denmark was the first country in the world to conduct a completely register-based census as early as 1980. Finland was the next one to follow suit in 1990. Using existing administrative material and registers in censuses and statistics has become more widespread in the last few decades. The 2010 census is exclusively register-based in the Nordic countries, Austria and Slovenia.

Methods used in Europe for the 2010 census

Many countries extensively draw on registers in addition to interviews. Register data are helpful for example in mailing, pre-filling the forms or filling in missing information. A few countries have a population register with a wide coverage, eliminating the need to send out forms to collect basic information of the population. The basic data for the entire population, such as age, gender and citizenship, can be obtained from the register. Interviews are used to collect other information, including data on employment. Interviews can target either the entire population or only part of it.

Existing sample surveys, such as the Labour Force Survey, can also be used in a population census. A combination of registers and sample surveys is being used in the 2010 census for example in the Netherlands and Belgium. France, on the other hand, has a unique method of taking the census: data on the entire population are collected on forms at different times in different areas, and in the largest cities, only part of the population is covered. Data on the entire country are collected within a period of five years.

To make it possible to carry out a census based on registers, or even to obtain part of the information from registers, the country must have at least a few basic administrative registers. In addition, a shared system of identifiers is needed to facilitate combining data found in various registers. The national legislation must also allow the use of administrative material in statistics production.

Finnish census one of the most cost-effective in the world

Cost savings are a key reason for introducing register-based censuses. The Finnish census is one of the most inexpensive ones in the world. It is estimated that the 2010 census in Finland cost some EUR 850,000. The world's most expensive census is conducted in the United States, where nearly US$15 billion, or more than EUR 10 billion, will be spent on the 2010 census. Based on the same cost level, the Finnish census would cost EUR 177 million.

Costs of the 2010 census according to an UNECE survey

In most countries, the census is the largest and the costliest individual process of statistics production. An enormous quantity of forms is required for a conventional enumeration. Information is collected on all persons resident in the country: one individual form is filled in for each person, and additionally a housing form for each dwelling.

Staff is also needed to collect, record, analyse and publish the data. Six million enumerators were needed for the 2010 census in China, and even in Russia, more than half a million were required. As censuses are repeated roughly every ten years, the majority of the staff taking part in a census is always new, and resources must be reserved for staff training.

The obligation to conduct censuses is laid down in Finnish legislation. The Population Census Act (154/38) adopted by the parliament in 1938 still remains valid, and under this Act, a population census covering the entire country and an associated census of dwellings and buildings must be conducted every ten years.

International cooperation in the sphere of statistics production was highlighted after the Second World War, and in 1950, the UN issued a recommendation on censuses and the data collected in them. The 1950 census in Finland was conducted following the UN recommendation, too. In the years that followed, the information content of censuses has to a great extent been determined by international recommendations.

As Finland acceded to the European Union, new requirements of data harmonisation were imposed on the country. The new EU Census Regulation, which entered into force in 2008, contains further binding provisions on the timing of censuses and the data content to be collected.

This is the first time a census with consistent contents is taken in all EU Member States. The first results of the censuses in the Member States will be published in 2014. Eurostat, the Statistical Office of the European Union, collects population census data on EU Member States in its online service, where this information is freely accessible.

The author, Kaija Ruotsalainen, is Head of Statistics in the Population Statistics Department.