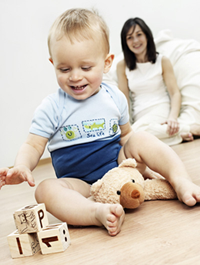 Origin and fertility as concepts

In this article, fertility is discussed in the demographic sense, that is, the word refers to realised fertility as differing from physiological fertility. The number of children born is compared with the number of women of fertility age (usually aged 15 to 49). (Pitkänen 2007)

Foreign background is in turn examined with the help of Statistics Finland's concept of origin. Origin is determined by the country of birth of the person's parents. Thus, it is possible to distinguish between first and second generation persons with foreign background. If the person and his or her parents are born abroad, he or she is of foreign origin in the first generation. Persons of foreign origin in the second generation are those born in Finland whose parents have been born abroad.

Women with Thai background the most female-dominated group of foreigners

This article thus examines fertility according to the mother's origin. The father of the child can thus be of Finnish or foreign origin. In addition to Finnish-born and foreign-born women, compared are women from three example countries of background. These background countries are Russia (incl. former Soviet Union), Somalia and Thailand, which each represent different continents.

When examining the whole population, the biggest groups of foreign origin are Russians, Estonians and Somalis. When viewing the foreigner population by women's share only, Thailand emerges as a top country in addition to these. For this reason, it was chosen to the fertility examination.

Only a few second generation women are of fertility age

Belonging to the fertility-age group does not mean that the woman would already have given birth or be about to give birth. A small group is also formed by those who have given birth before they reach the age of 15 or after they are 49.

Between 2007 and 2011, women with Russian background gave birth to 1.7 per cent of the children born in Finland. Among Somali women the share was 0.5 per cent and among Thai women 0.4 per cent.

Women with foreign background give birth to an average of 2.1 children

One of the most used index numbers for fertility is the total fertility rate (TFR). This figure indicates how many children a woman would give birth to calculatorily during her life if age group-specific fertility rates remained the same as in the year on which the calculation is based. In 2011, the fertility rate in Finland was 1.83, or slightly under two children per woman. This figure is calculated from all women of fertility age belonging to the population of Finland, that is, all women of Finnish and foreign origin in total.

The total fertility rate of women of foreign origin is slightly higher than among Finns. Between 2007 and 2011, this figure was, on average, 2.09 for women with foreign background, while it was 1.84 for women of Finnish origin.

Figure 1. Age group-specific fertility rates among women of Finnish and foreign origin, averages for the years 2007–2011

No great differences in average age of women giving birth

Fertility can also be examined from the point of the average age of women giving birth. This figure gives an average for the age of the women giving birth in a certain year. When examining all women having given birth in total, differences in the average age in 2007 to 2011 are small: the average for the years was 30.1 for women with Finnish background and 30.0 for women with foreign background. Yearly, the difference has been between 0 and 0.3 years, so the differences can be calculated in months.

The average age of women giving birth differs only little among women from example countries of background compared with women with Finnish background. The figures for Thailand, Russia and Somalia as background countries are calculated as averages for the years 2007 to 2011.

Three out of four mothers with foreign background are married

Fertility can also be examined based on the mother's marital status. The number of children born in wedlock went down fast from the mid-1990s to the beginning of the 2000s, but in the 2000s this reduction has slowed down (Statistics Finland 2012b). In total population, 59 per cent of the women having given birth were married or in a registered same-sex partnership between 2007 and 2011.

If included are only those whose background country is Finland, 58 per cent were married throughout the period 2007 to 2011 (Figure 2). This figure is considerably higher for women with foreign background, 76 per cent, on average, over the same period.

On the level of total population, 46 per cent of women at first confinement were married or in a registered partnership between 2007 and 2011, that is, much fewer than of all women having given birth in total. For first-time mothers with Finnish background, this figure was 44 per cent, on average, and for women with foreign background it was 72 per cent from 2007 to 2011.

There may be many reasons for the differences in the shares of married women. Women with foreign background are generally more often married than women with Finnish background are. This is partly caused by their different age structure and cultural background.